“Since 2009 we have supplied hundreds of stretch tents every year for large and small events across the world, from Japan through Madagascar to Bolivia.”

Developing and optimising stretch tents has always been our passion. After building up years of experience in the development of high-quality tents, we needed a change of direction. In 2010, Bonga saw the light and the classic party tent had to make way for a flexible version that immediately also had an attractive appearance. It was a real adventure learning by trial and error to achieve the current quality: optimising and reinforcing fabrics, continually testing and adjusting.... But the end result came closer step by step! The demand for Bonga tents rose quickly, so we had to start looking for motivated professionals who went to work with equal passion for our tents and contributed to the excellent reputation that Bonga evokes today.

Nowadays, a dedicated team works every day to convert this craftsmanship and product and materials expertise into stretch tents. The result: a high-quality stretch tent made in Belgium at a reasonable price. Our team has fifty years of combined experience, which is also passed on in full to new team members. 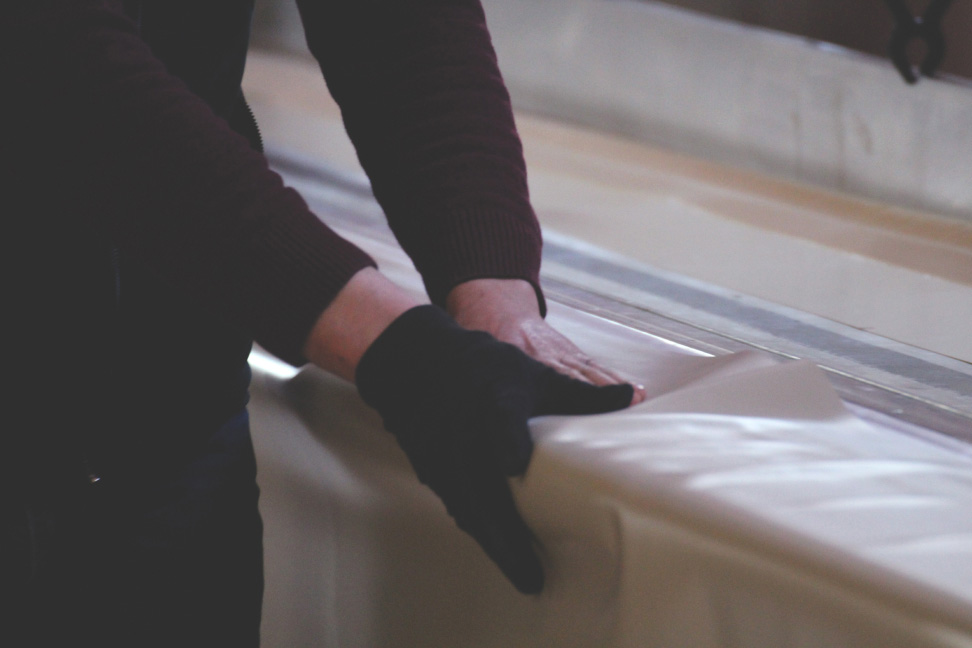 Naturally, a sophisticated production process goes into the creation of a finished stretch tent. It all begins with the production of the fabric. A single- or double-sided PVC coating is applied to strips of sustainable knitted polyester at high temperature according to quality (single or double coated). Knitted fabrics are much more elastic than woven fabrics. And they allow this to be an essential property of stretch tents. For example, compare a knitted sweater with a classic shirt and you will immediately understand what we mean.

During the production process, the tent material is subjected to various checks at different times: thickness check, bonding check, colour check, elasticity check etc.., After that the fabric is ready to be made into stretch tent material. 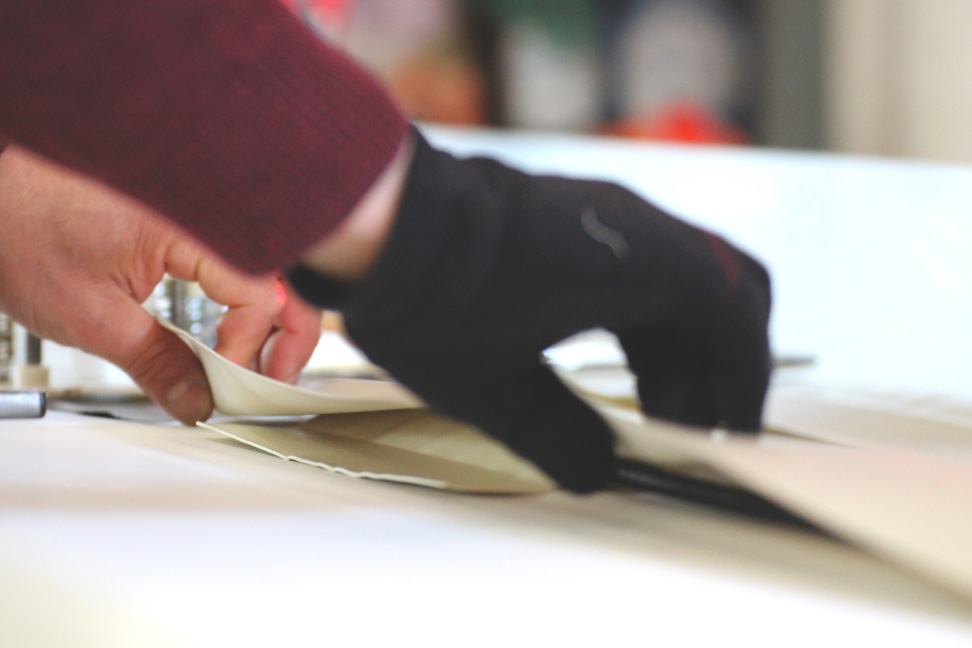 Thorough to the smallest detail

Depending on the size, various strips are welded together once more at high temperature and under high pressure. Thermal welding ensures the water tightness of the tent, even where two pieces of fabric come together. Because the two strips melt into each other during welding, you can even state that the welding seams are even stronger than the fabric itself. That is not the case for fabric that is sown or glued together. The edge of the stretch tent is then folded around a trapeze cord. At the same time, the tent is fitted with reinforced zones in the edge, to which the side clamps will later be attached. Finally, the corner clamps are fitted and the tent is packed. 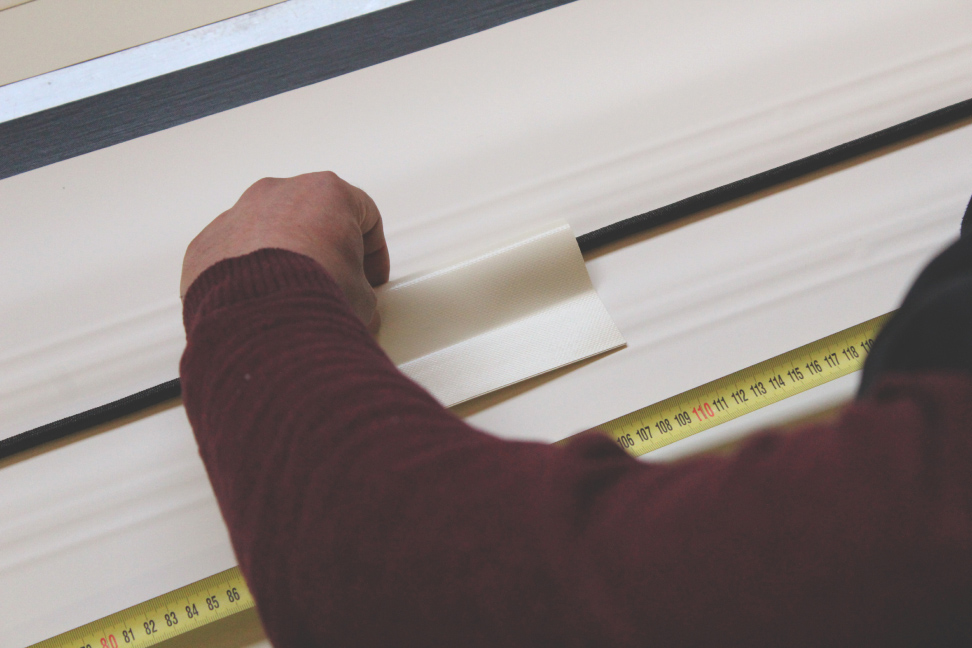 Because we are in control of every step in the production process, the possibilities are endless. We supply a fixed range of formats which are most in demand immediately from stock, but we also produce stretch tents to the client’s custom requirements. And the cliché that custom work is expensive and takes a long time, helps Bonga all over the world. Custom made tents are also reasonably priced and are usually supplied within a week. If your tent suffers damage due to circumstances, we are happy to help and, in most cases, we are able to repair the tent quickly.

Following an entire history making various types of tent, we felt like a new adventure. We heard rumours from South Africa about flexible tents that could adopt different shapes. Very flexible, but insanely expensive. The concept spoke to us, but we wanted our own version: lighter, easy to erect and most of all, affordable.
‍
Without ever having seen this type of tent close up, our product developer sat down at his design bench and the result was the idea for the integrated trapeze cord and the clamps.

All major success stories begin with setbacks. In the production of the first tents with the very first load of fabric - the same material used to make wetsuits, by the way - it was evident that the tents were not fully watertight or UV-resistant.

The first clamps, drilled blocks of wood which could be tensioned over the side seam using a bolt, were perhaps a little primitive, but they were functional.
2011
First stretch tents
2012
Flexxfoil

Birth of the Flexxfoil stretch tent

To replace the non-watertight and non-UV-resistant material, a new type of fabric was developed. The problem with UV-resistance was fairly straightforward, but it was a real achievement to make the seams watertight. After much trial and error, after weeks of gluing, taping and welding...the first watertight commercial range of stretch tents was ready: the Flexxfoil stretch tent was a reality. This tent was also the very first in the world to be designed with triangular, plastic clamps. Sales were a great success, especially in the Netherlands.

For the events market, we had to treat the tent canvasses with additional, temporary fire-retardant substances, as it was not yet technologically possible to do this during the production process. Whilst the previous production processes were outsourced, in 2013 we took production fully into our own hands. The design workshop in Ghent was converted into a production workshop. An eighteen-metre-long welding machine was installed and we worked with European weavers to develop an even more durable canvas, which would also comply with the M2 fire-retardant certificate. Thus, the Proflexx stretch tent was born.
2013
Proflexx
2014
Burning man

Thanks to intensive advertising and marketing, many customers from the United Kingdom found their way to Bonga, as a result of which our tents could be seen at the many British summer festivals. Partly due to this, we received the contract from the world-famous Burning Man Festival in the Nevada desert for the design and construction of the central tent village.

This was a real challenge, as there are sandstorms every day in Nevada. After six months of sleepless nights, in August 2014 we went to put up our tents in the middle of the Nevada desert. An unforgettable experience and furthermore a successful project, since the 2,200 m² of Proflexx tents survived the sandstorms without any problems.

The increased production capacity came at exactly the right time, as in 2017 an enquiry was received from the fashion house Dior, who needed a 2,400 m² tent village for their Fashion Shows in Hollywood Hills. As luck would have it, we were already flat-out producing stock for the coming season. In addition to production capacity, we also had plentiful stock of tents, so we were able to supply quickly via Ghent and via Spain. We were able to use a large part of that stock for the tent village in Hollywood.
2017
Hollywood
2018
Relocate

A large factory site directly opposite the original design workshop in Ghent became available and Bonga grasped this opportunity to purchase the premises and from 2018 to relocate production to the other side of the street, now with two production lines and a large warehouse for the storage of the ample stock of Proflexx and Triflexx stretch tents.

After relocating production, three increasingly more successful seasons followed. The demand for stretch tents from the private market also continued to increase and we responded to that with the development of the Flexxer, the easy-up stretch tent. Thanks to its lightweight canvas and easy assembly, one person can easily erect this tent in around half an hour. Naturally, at Bonga we have also gone for high quality and reasonable prices for this little brother of the stretch tent.
2020
Flexxer
2021
Expansion

The demand for stretch tents is continuing to rocket, so Bonga is relocating once again to a workshop that is twice as big as the previous one and recruiting more staff to stay on top of the continued increased demand for stretch tents. We are investing in extra welding machines to double production capacity and to be able to respond quickly to the needs and wishes of our customers. Instead of 450 tents annually, Bonga is now producing almost 1000 tents annually, of which 300 are immediately available from stock.

After a long history with other types of tents, we felt like a new adventure. From South Africa we heard rumors about flexible tents that can take different shapes. Very flexible, but insanely expensive. The concept appealed to us, but we wanted our own version: lighter, easy to set up and also affordable. Without ever seeing this type of tent up close, our product developer took a seat at his design table and that's where the idea of ​​the incorporated trapezoidal cord and the clamps.
1992
Birth of bonga

All great success stories begin with adversity. During the production of the first tents with the very first load of fabric - the same fabric used to make surf suits, it turns out that the tents are neither completely waterproof nor UV resistant. The first clamps, drilled blocks of wood that could be bolted across the side seam, were perhaps a bit primitive, but they were functional.
1996
Water resistance

Birth of the flexxfoil stretch tent

A new type of fabric was developed to replace the non-waterproof and non-UV resistant fabric. The problem of UV resistance was gone, but it remained a feat to get the seams watertight. After much trial and error, after weeks of stitching, taping, welding… the first waterproof commercial range of stretch tents was ready: the flexxfoil stretch tent was a fact. This tent was also the very first in the world to be set up with the triangular plastic clamps. The sale was a great success, especially in the Netherlands.
2011
Flexxfoil

For the event market, however, we still had to treat the tent fabrics additionally with temporary fire retardants, because it was not yet technologically possible to do this during the production process. While the previous production steps were outsourced, production was completely taken back into our own hands in 2013. The design studio in Ghent was transformed into a production studio. An eighteen-metre-long welding machine was installed and we started working together with European weaving mills to produce an even more durable fabric, which can also bear the M2 fire retardancy certificate. This is how the proflexx stretch tent came to life.
2013
Proflexx

Thanks to intensive marketing and advertising, many customers from the United Kingdom suddenly found their way to Bonga, making our tents visible at the many British summer festivals. Partly because of this, the world-famous Burning Man Festival in the Nevada desert in the United States commissioned us to design and build the central tent village. A real challenge, because there are daily sandstorms in Nevada. In August 2014, after half a year of sleepless nights, we literally pitched our tents in the middle of the Nevada desert. An unforgettable experience and also a successful project, as the 2200 m² of proflexx tents survived the many sandstorms without any problems.
2014
Burning man

The workshop of barely 240 m² quickly became too small to be able to continue to process all requests. Thanks to the Burning Man adventure, the Bonga tents sold like hot cakes. In Tarragona, Spain, we bought a 1000 m² factory building from which tents with a newly designed fabric - the double coated triflexx - were produced from 2017 onwards.
2016
Triflexx

The increased production capacity came at just the right time, as in 2017 a request came in from fashion house Dior, which needed a 2,400 m² tented village for their Fashion Shows in Hollywood Hills. If so determined by fate, we were already busy producing stock for the coming season. In addition to the production capacity, we now also had a large stock of tents so that we could deliver quickly via both Ghent and Spain. We could use a large part of that stock for the tent village in Hollywood.
2017
Hollywood

A large factory building will become available directly opposite the original design studio in Ghent. Bonga seizes this opportunity to purchase this property and to move production across the street from January 2018, with two production lines and a large warehouse for the storage of the large stock of proflexx and triflexx stretch tents.
2018
Moving